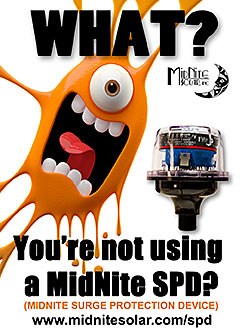 Ananda Power Center with a Trace SW and conduit box.
During the early 1990’s when Ananda was gaining in popularity, I was very busy at Trace Engineering doing the mechanical engineering on the SW and DR inverters. The industry standard inverter at the time was the Trace U series. I never made the U series able to accept battery cable conduit because I had little knowledge of the NEC. As it turns out, the industry was just learning about the NEC. Remember, the inverter industry was fueled by marijuana growers in Northern California and they didn’t have much use for inspectors. The Trace DR and SW series inverters were the first in the industry to have this NEC compliance addressed by virtue of conduit boxes among other mechanical design aspects. Ananda boxes concentrated heavily on DC load circuits. I figured that if you had a modern, efficient and reliable inverter, why would you need so many DC circuits? That notion was somewhat naïve on my part since I had actually never yet seen a real off-grid installation. Another aspect of the Ananda box was its high cost. It used a nice class T pull-out fuse for inverter current protection and breakers for all other circuits. The high cost, I figured, was due to the custom nature of this product as well as low quantities that have always plagued our industry. It seemed that there should be a code compliant solution to address the inverter battery over-current protection and disconnect that was affordable. None existed, so I began designing the Trace DC250, (1994 or 95).
Go to page 4